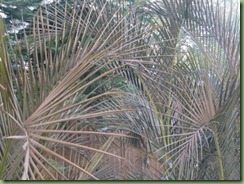 They were rotted in the center and infested with ants.Time for them to go.

After a day and a half of me hacking away,using an a pick-axe,using the electric chain saw(I don’t do  gas power-too scary),and even trying to pull them out with the Tacoma,YardBoy finally took pity on me,and hauled out the gas powered chain saw.Done!Outta here!(I guess I owe YardBoy a ‘favor’ or two…wink-wink)But the roots still remained…. 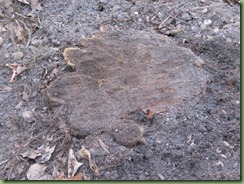 The original plan was  to replace those cold sensitive palms with something a more cold tolerant palm.But there was no way I could remove that root without a back-hoe.And that was not gonna happen.

So,it was back to the drawing board and come up with a new plan.

Since YardBoy had been considerate enough(wellll,there was some prodding from me involved) to remove the palms pretty much level,I figured I could use that as a base for a planter.

A new planter and plants were bought. 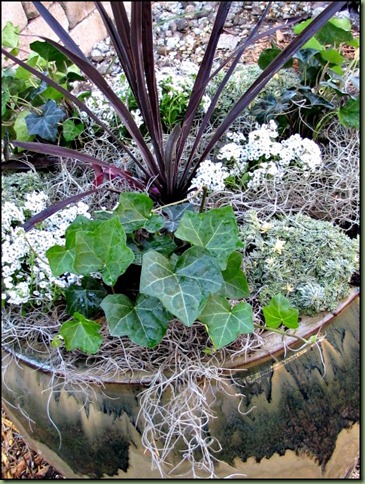 I used a Cordylline in the center,surrounded by ivy,sedum,and alyssum.Around the base are Liriope , which are just divisions off of ones we already had.They were due for some  for some thinning out anyway. 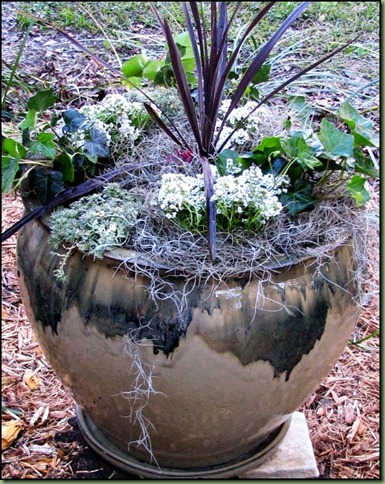 I’m just not good with the patience thing…………..

That's a very cool pot. I don't do a lot of pot planting since they have to be picked up and stored around here, and it's too much work. I'm not patient either...I'll plant seeds and then check them the next day like they should have grown! Good luck re-doing the deep freeze.

That is a good plan indeed! I like that planter and the cordyline in the center. What kind of sedum you used? I just had a new post about the usage of Sedum hybrid florida friedly gold in my garden, it spreads very fast. So very soon, your planter will look very lush!

oooh. I love those planters. They are really pretty. Good replacement I think. You will be able to change out the plants as needed or wanted. The new plantings will fill out very soon. Be sure to update us with new photos. And kudos to "yardboy" for helping you get those palms out.

Yay for the yard boy... those boys DO come in handy. Your configuration sure does look familiar. :^)

You can't beat those red sensation cordylines... None of mine were even bitten with all this cold weather.
Meems

Ami-I'm not sure which sedum that is.I threw the tag away :-/.Maybe Meems could help us out with that....?
Nana-that was my thought.To be able to change the annuals out with the seasons.
Meems-more and more I'm loving the cordylines.

Great idea to place a container garden there. It looks great...I especially like the Spanish moss.

I had the same problem with a dead palm, my solution was to plant bromeliads on top of the cut off trunk and after a couple of years the bromeliads are holding tight to the trunk.

I've been keeping an eye out for sedum but hadn't run across it yet. I have a corner planned for it. Maybe I need another trip to one of the garden centers today!

I may have left several comments today. Please delete any extras. I tried to switch to my wordpress ID, but since I have commented here using my google ID, the system didn't want me to change over.