Let's get the blah out of the way first,shall we.......?
The summer rain pattern has finally kicked in.The end of September!Doesn't Mother Nature know it is now Autumn,fer cryin' out loud?
The mosquitoes!You cannot go anywhere in the garden without covering yourself in Off.
See above....
The mermaid has even fallen over!Into La Toilette! 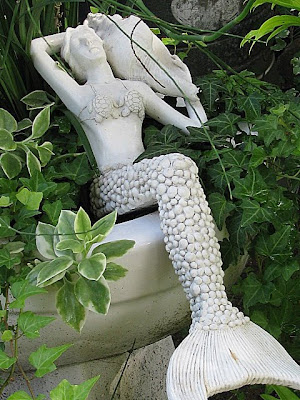 Has she passed out from the heat?The humidity?Or has she just given up?
The Bucs suck,as a so-called football team.

The coleus are lovin' this weather...... 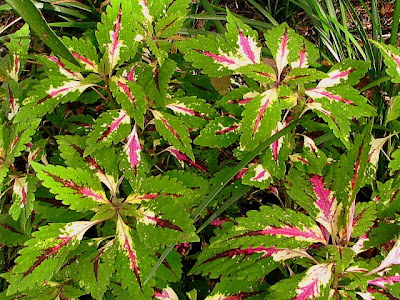 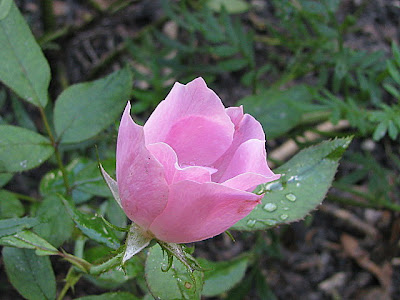 This one is my favorite.It just reminds me of something my mother would've grown.

The Caladiums are still putting on a show..... 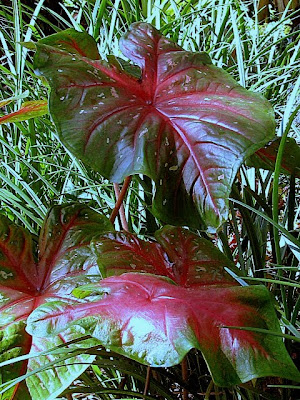 May be their last of the season,but hopefully,they'll last just a little longer.
The Fulgurium are absolutely gorgeous,with their foliage.
I hope that they will bloom this year. 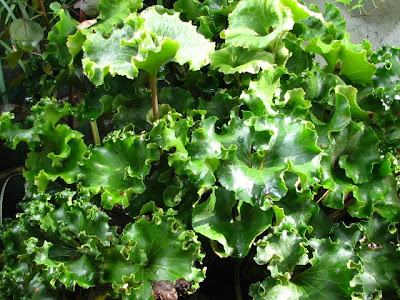 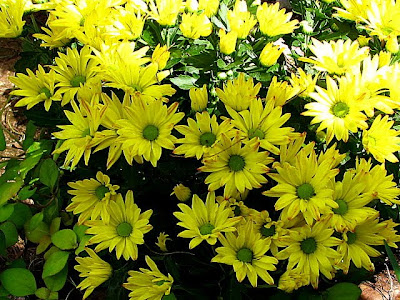 Isn't it amazing what you can find on the clearance rack at a nursery?

I bought this for $.50 somewhere.I think it's of the Kalanchoe family,but I'm not sure.Thoughts,anyone?

For the life of me I can't remember where.

I just figured it needed a home and some TLC. 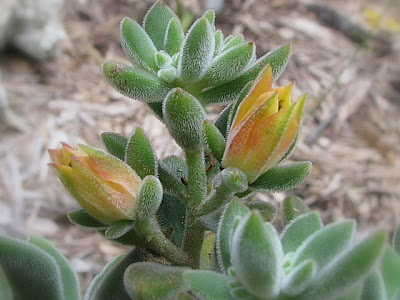 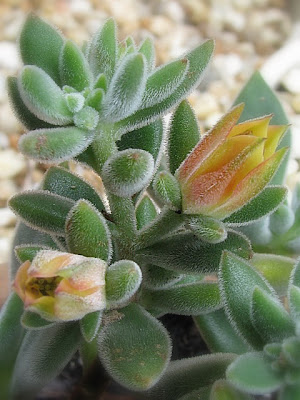 In Florida,how do we gardeners know it's Fall?

The daily high temperature now averages 89,instead of the 90's.
The afternoon rains don't come with an everyday frequency.Now,it's more like every other day.
Most summer tropicals are starting to slow down.The only thing growing with abandon are the weeds and the grass.
The mornings do have more of a breeze,as do the evenings.But the afternoons are still like August.
Football is back!! The Florida Gators and the USF Bulls are both 3-0!!

But if one looks around the garden,you just might see the colors of Autumn......

The orange and black of a Gulf Fritallary caterpillar on the Mandevillea...... 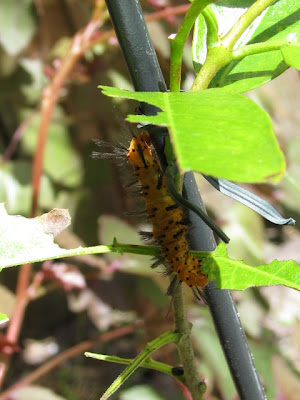 The leaves of the Hibiscus Acetosella 'Red Shield' stand in for the leaves of a maple tree....... 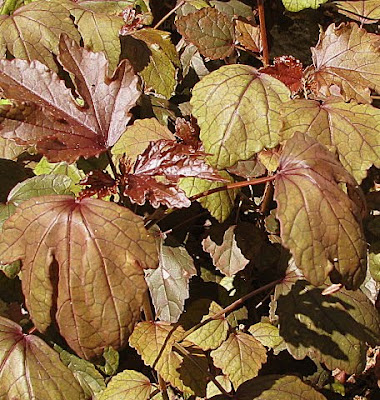 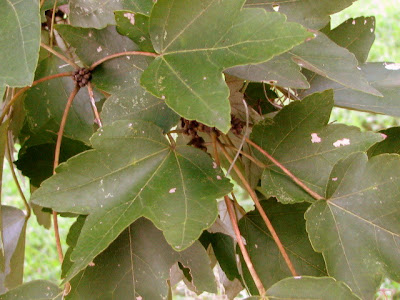 They won't change colors until December.They may turn a reddish brown,but they quickly fall onto the lawn,to be raked up and put into the compost pile.
The Florida maples we have in our yard are considered wetland trees.And are protected as such.The are short-lived.maybe 15-20 years.And have shallow,fibrous roots.
So,we turn to making over containers,into miniature Fall gardens.......... 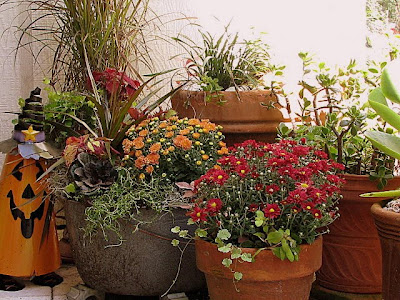 The planter in the back left contains Purple Fountain Grass.The lower left front is a mum,with a dracena cutting,coleus,ajuga,and German Thyme. 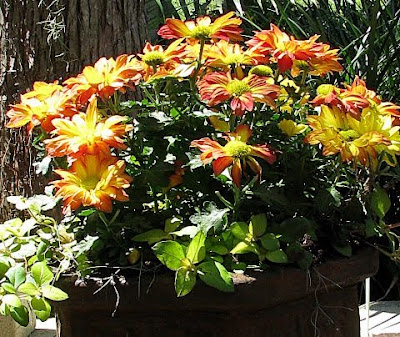 Yep,I caved and bought a Pelee' Mum at the grocery store.I couldn't help myself.It does look kinda neat out by the pool.
Now,it's time for barbeque and football!!!! 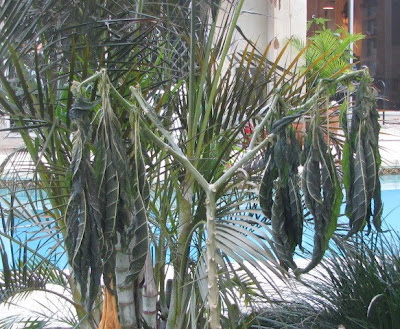 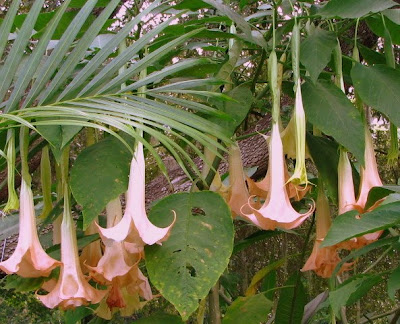 Each succesive bloom has been better than the last.And this time it is 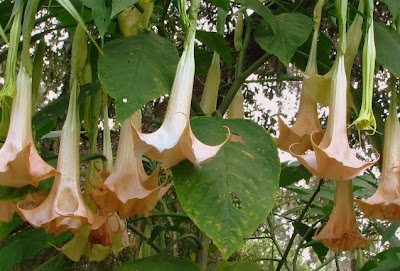 Mucho thanks to Sue at Luxe Lanai for the idea of taking the lower leaves off,and making it more of a tree shape.
It soooo shows off the blossoms!Thanks,Sue!
Posted by Unknown at Thursday, September 10, 2009 4 comments:

Labor Day Week-end.The official end to summer.But in Florida,it's still 90 degrees and humid.Summer won't end here for another few weeks,with the arrival of the first blessed cool front.
Which will drop the temperature a few degrees,but most importantly,it will drop the humidity!
And we can return to our Florida gardens,in earnest.

In the meantime,it's time to take stock of the highs and lows of this year's Springtime garden......

Let's get the lows out of the way first.

The fact that one fourth of our yard is fallow,due to Hillsborough County......Don't get me started!

The on going drought,here in Florida.The summer rains have just not materialized the way they should have.They have been very spotty .Sort of a hit or miss situation. 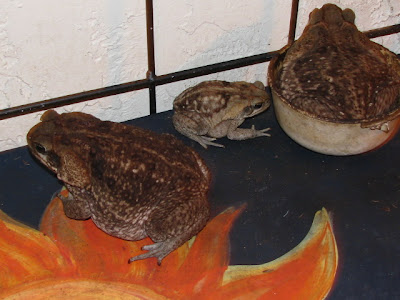 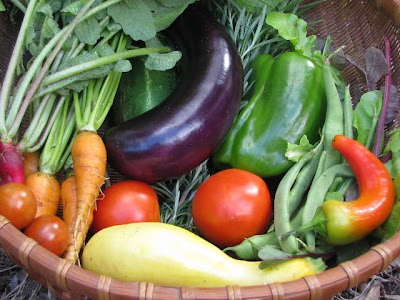 We did all right,but not as good as if it had been raised beds.We so look forward to next year's Spring garden.
For now,we are planting winter vegetables amongst the flower beds,which may turn out to be a good thing.We'll see....... Gardeners always have hope.....
The palms by the pool.Two years of freezes have really hurt them.Two of them have come back,but if the other two don't look any better next spring,they will be removed.
Half of our Cordylines just up and died.For the life of me,I cannot figure that one out.All were planted the same way,etc.No rhyme or reason.The frustration of gardening!
On to the highlights.......
Number one of my list,is getting to meet and know Meems.Seeing her garden was such a joy.The woman is a star!Her blog does not do her garden justice,I pinky swear!
After this past winter's freezes,I was filled with trepidation as to what we would be left with.But in all actuality,it would seem that the freezes may have helped alot of the plants.
The bromeliads are the best they have been in years,and are still blooming. 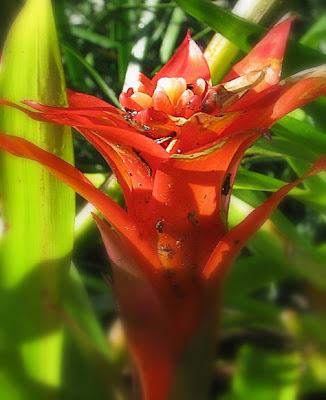 I found a new favorite plant.A mini Red Iris.It is just beautiful.I only wish I had had the foresight to buy more than one.But not knowing how it would do,I only bought the one,but was able to divide it into two plants.Both of which have already grown,and should be divisible again. 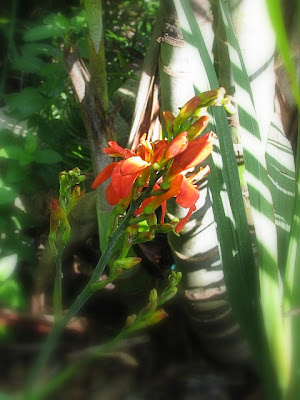 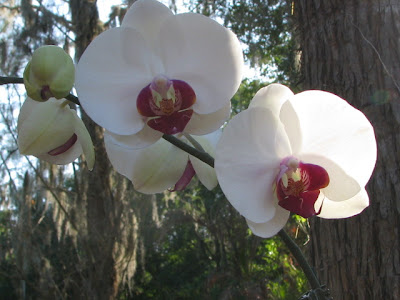 My plumeria grove.You all must know by now,how much I love these gems!They are such troopers.They all bounced right back,and are blooming(or in bud),their little hearts out.I just love them to death! 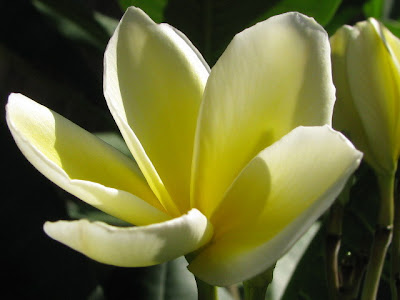 How could one not love these fragrant charmers?
The birds and butterflies.This year has been a banner year for both.Especially the cardinals.I have never seen so many cardinals at the feeders,as this year.
We have identified three different hawks that frequent the yard.We have DarthVader,just because he looks like DarthVader when he puffs up.We also have one that Jon calls the BitchyFemale,just because she screams all the time,until it sounds like she has laryngitis.Jon says he feels sorry for whoever her mate is.
And this one is my GardeningBuddy.We think it's a female,because she's smaller than DarthVader(who we think is her mate-just because he's always around when she is).She's quite curious as to what we do in the garden.She seems to like watching us silly humans.She will just sit on a branch of our oak tree and just watch with fascination.She also has a penchant for looking in our bedroom window,especially whenever Jon is getting dressed.Could she have a crush on him?We love it! 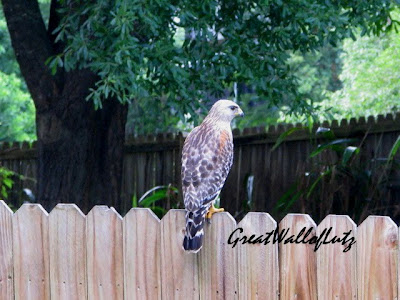 We have more Ibises,Egrets,Great Blue Herons and this Little Blue Heron this year,also.But no SandHill Cranes.We used to have a pair that came in the yard,but not this year. 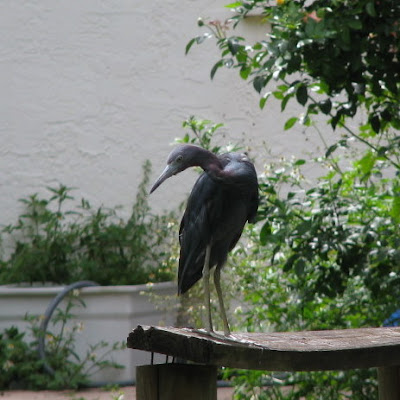 And we both were lucky enough to capture a Hummingbird.Talk about doing the happy dance when I caught this shot! 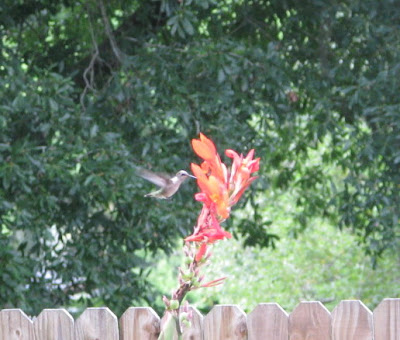 But most of all,we have enjoyed the butterflies........ 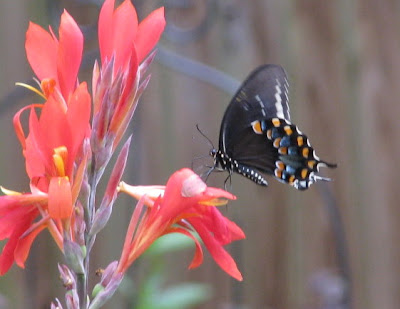 Every morning and late afternoon,the yard is filled with them. 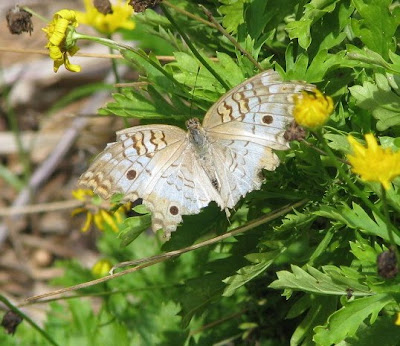 We have been lucky enough to see two generations of Swallowtails come into this world.A most incredible experience,I must say.
Our Monarchs----not so good.Note to self-buy more Milkweed. 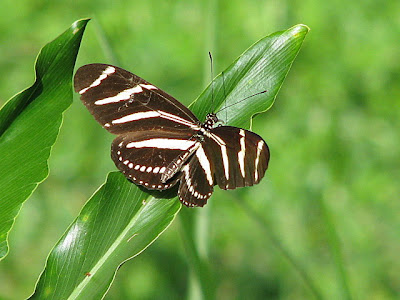 So what's in the future?
-Getting the rest of the garden done and finished,whenever the County decides to honor us with their presence.Which includes a proper vegetable garden.In raised beds.
-Only do major renovations to the garden in cool weather(yeah-right!),which includes expanding the shade garden that is down by the water.
-I need and want a proper garden/potting shed.A greenhouse would be nice,in case we have another winter like these past two,but I shall be reasonable.
-Introducing more native,or Florida friendly,plants into the garden.Including more Milkweed.
-Taking my 90 year old Dad to meet Meems.That should be a true meeting of the minds.
-Look forward to next Spring.
Soooo,
what's on your agenda?
Posted by Unknown at Sunday, September 06, 2009 8 comments: