So,it was decided,mutuallyI might add,that the day would be spent getting the rest of the plantings out of the way of Hillsborough County,before the projuect starts.It is now on the schedule for late June,early July.And we figured it would be best to do it now,instead of the heat of June or July.So,anything we really wanted to save has now been relocated to other areas of the yard.Even the Al Gore Memorial Fire-Pit has been taken down(hold back your tears,people....),and a new walkway out to the well has been put in. 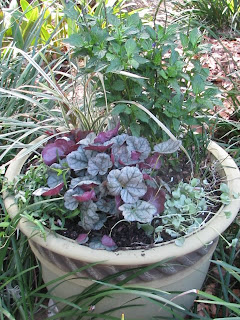 Jon decided to take apart our old,rusted charcoal grill,and I figured,"Oooo,a new planter." Two of 'em in fact.This is the bottom,which sits under the big old oak.It contains a division of a variegated Flax Lily,a lonely Impatien that popped up in the yard,and a potpourri of rooted cuttings that needed to be planted. 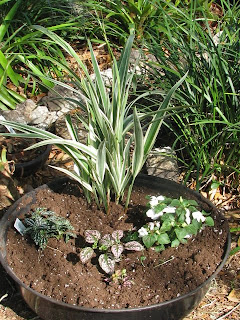 Shall we move on?
I really don't care for strawberry jars.They never look good,they're a pain to take care of,blah-blah-blah.but this year I decided to go for the succulent look.These two are on the new mini-me wall.Jon made some "watering sticks" out of PVC(I found the directions on the Internet).So far,they look pretty good in the succulent,rock garden.Time will tell...... 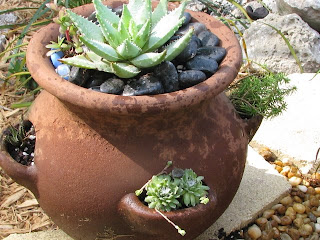 You can actually see the piece of PVC in this picture. The cannas are growing by leaps and bounds.Obviously,the freezes of this past winter did not effect them.I just wish the palms by the pool would recover as quickly.They're getting there,but they suffered some extreme damage from the cold,so I think it will take most of the summer for them to recover.That and alot of TLC. 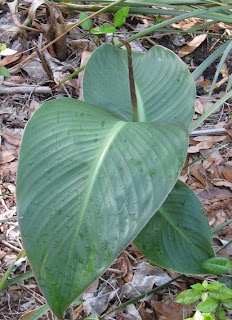 And,Glory-Be,the "contraband plumerias" are bursting forth!! They got all mixed up on the way home(husbands just do not get the importance of these things.Grrr....),so,now,I'm not sure which is which.I'm hoping that this one is the double white. 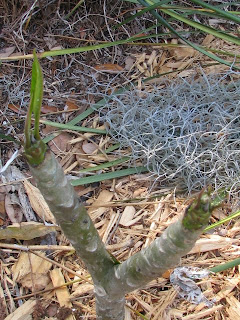 The stag horn ferns are going great guns,too.So,if anyone needs a cutting,let me know.This one is incredibly huge.It really needs to be reduced in size. 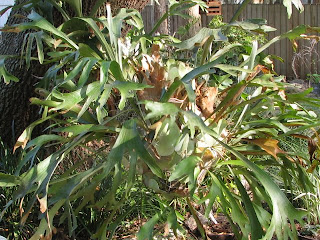 And,of course,our gardening buddy was back,today.......I'm not sure,but I don't think this is the same one as usual.It seems bigger than our usual visitor.And he/she didn't seem to want to pose for the camera like the other one does.He/she had the attitude of,"Take the picture quick,lady,and be done with it!" 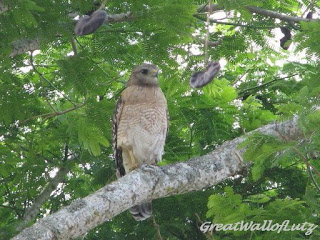 By the way,if anyone in your neighborhood wants to plant an Elephant Ear tree(actually,I think they are now considered invasive in Florida,and are no longer allowed to be sold.Correct me if I'm wrong.),shoot them!This is our neighbor's tree,and it is the messiest tree,I have ever seen!The pods are all over our yard.They do a real number on your lawn mower.If you don't get them cleaned up right away,they each start to grow.When there is a strong wind,branches fall into our yard.Yuck!!!
So,now,it's time for a shower and......... 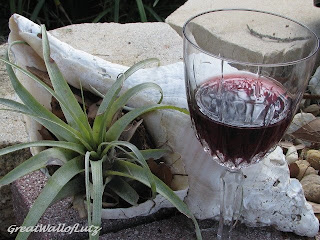 You have such a wonderful variety of plants and flowers. How fun it must be to garden in your area. Most of what we have is planted each year. Not much will survive -50 degrees. I'm still very young in the learning process so I'm sure my garden with get better over time. I'm curious to see if any of the stuff that is supposed to come back does. I love when you share your yard!

Your plants sure are looking wonderful, I have never grown a Stag horn fern are they easy plants to care for?
I see you end your day in the garden the same way I do. A nice hot bath or shower, and a glass of wine. How perfect is that.

Gayle-my motto is"What do I have to lose?" If it doesn't work,then at least I know it's not the plant for me.

keewee-Staghorns are incredibly easy to grow.At least here in Florida.You just cut off a section,tie it with fishing line to a piece of bark,hang it from a strong limb(they tend to get heavy when they grow up),walk away,water it with a spray from the hose every now and then.Voila'

you're just so industrious! I don't think that's the same hawk, either. I went through your other hawk pics and it just doesn't seem the same.

Looks like you've got your spring gardening well under way. I love what you did with that strawberry jar. Great idea! Once my parsley dies I'm gonna convert mine to succulents. We are fortunate that our plants recover quickly from winter freezes. But I do wish my palms would bounce back quicker too. I think they're going to take the best part of summer before they really look good again.

Susan-I think I'm fussing too much over the palms.I've done everything by the book,but they're coming back soooo slow.I need to learn more patience.

Hi Chris,
You've been busy with some fun containers. I just LOVE putting containers together. Don't love having to water them but ... it's the trade off. Looks like you've got some porterweed in that first one too.

I think my xanadu is coming back VERY slowly and I have a lot of it so I miss its lush foliage very much. I guess we are spoiled but I have to say I'll be really happy when all plants are back to normal.

I'm not a fan of strawberry pots either but the succulents fit yours nicely.
Meems @ Hoe and Shovel