It’s been hot! Seriously hot! I guess global warming is here…..Al G. may be right….

Today,I came home to find a lubber clinging to the front door!

To try to control the Lubber population around TheGreatWall,some of you may remember that a while back I bought Nolo-Bait.Do I think it is working?

But I notice that the Lubbers are more easily beheaded.

They seem weaker.They don’t seem to hop as far,nor do they seem to be able to fly.If they fly at all,they seem to struggle.

They seem susceptible to hornet/wasp spray.

Have I seen any cannibalization? Nope.I behead them before they get the chance to eat each other.I’m afraid to wait.

Something is eating the bait out of the traps I set out.I did find two on the Queen Emma Crinum.But they seemed disoriented.Easily disposed of.

All of the others that I have found have been in weird places.Obviously the Nolo-Bait has effected them physically.Hence,their lack of ability to jump or fight back.

While on Lubber Patrol,today,I had camera in hand….

The first blooms of the Angel’s Trumpets….. 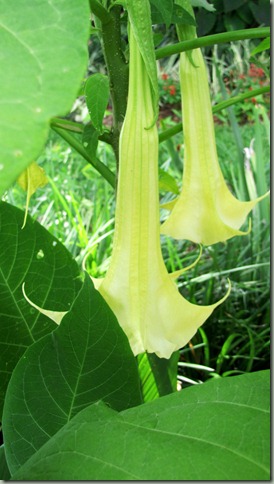 I can’t remember them blooming this early.The weather?

The Tillandsia’s I bought at The Naples Botanical Garden have settled in quite nicely,and have become friends with the other plantings…. 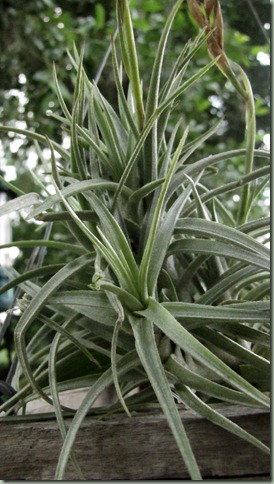 Another Tillandsia that I found in the large oak tree,and moved to a hanging basket…. 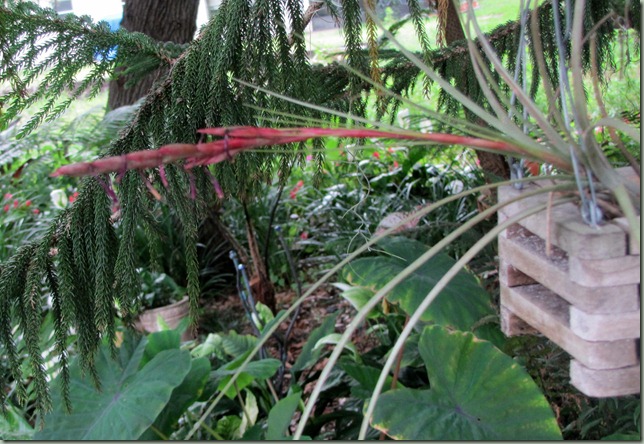 Where did this petunia come from? 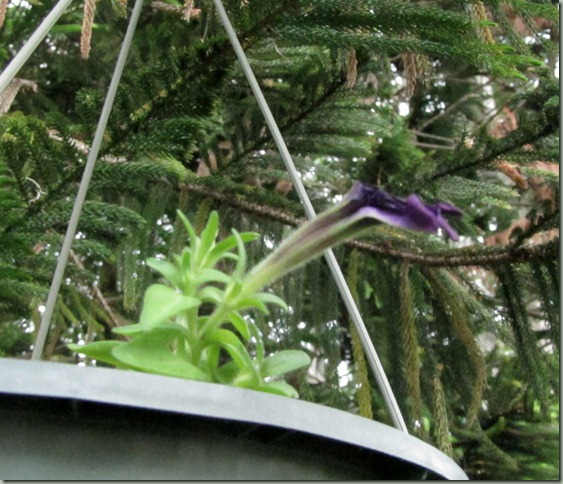 This was an empty(or so I thought) hanging basket.I have never had purple petunias.

Dinner,tonight,is shrimp sautéed on the grill with Bloody Mary seasoning,that I bought here.

Served on a bed of couscous,with a side salad of tomatoes and cucumbers,from the garden.

Dinner sounds scrumptious. I may have to rethink what I'm planning to have.

This hardly seems the appropriate next paragraph after dinner conversation, but I am hoping the Nolo Bait is working. I have only seen one full grown lubber and he was sitting in the middle of the driveway and didn't even dodge my husbands foot. I have one more application to put out this weekend. I sure hope it will be a solution for the lubber problem.

Your angel trumpet is so pretty. I love their look but don't have any growing here. Your tillandsias look very healthy and happy. Mine are much happier since I moved them outside and water them more regularly with the hose. Sorry I can't help with the ID on your found one. How neat to have a wild one growing in your tree.

I'm gonna have to try that Nolo Bait. I'm still doin' it the old-fashioned way...smashing as many nymphs as possible and goin' on lubber hunts later in the season.

Your angel's trumpet is just beautiful!