this year,has out performed all previous years.

Back in January,after the County was done with their drainage project and had brought in new clean fill(very clay-ee),three new raised beds were added to the vegetable garden.

Those three have out shone the previous two.

All five have been watered the same,

and fertilized every three weeks with fish emulsion.

This is how I do it… 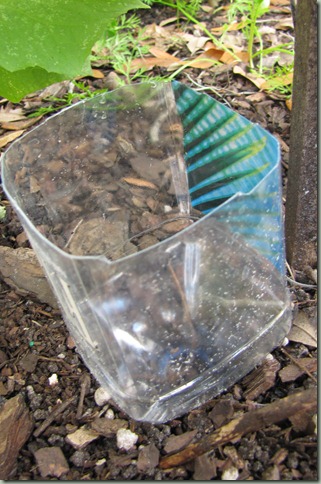 Each plant gets a bottle and I pour the fish emulsion solution into it.This way it gets right down to the roots.Plus,I’m recycling.

Every month,I top dressed all five beds with compost.The only difference is the three new beds are on top of the clay soil and the other two are on regular Florida soil.Sand!

I can only conclude that the plants in the three new beds were able to sink their roots into the clay soil(which tends to hold moisture better)and grew like Topsy.

With that being said,it is time to give out my awards for winners and losers….

The last two are from seed I saved from the Fall garden.I am starting to prefer the heirlooms over anything else.They seem relatively pest free and are not very needy,which suits this gardener just fine.

The Brandywine have outgrown their support system(which is six feet tall).And are great producers…. 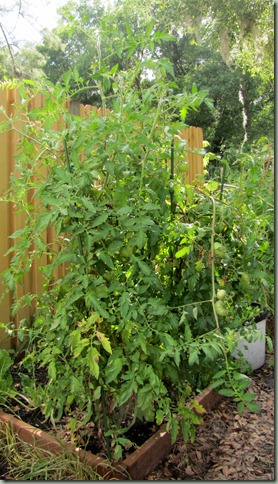 This is just one plant! 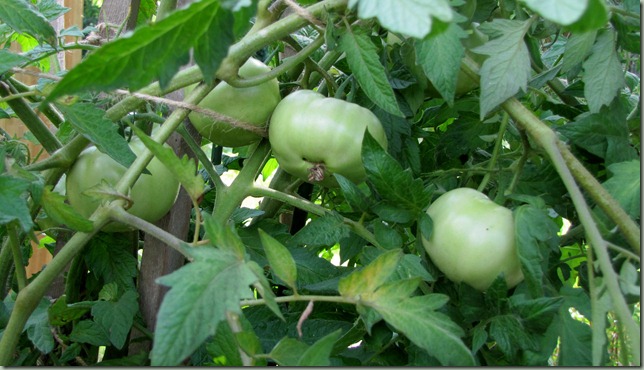 The Galinas are just now starting to produce… 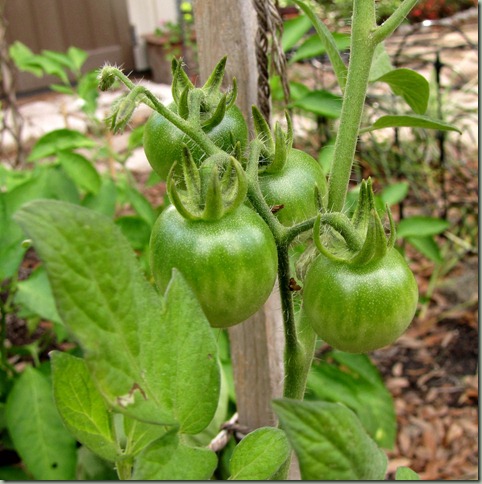 Though they are growing,the Cherokee Purple have yet to produce.I’m starting to think they may be more of a cool weather tomato. 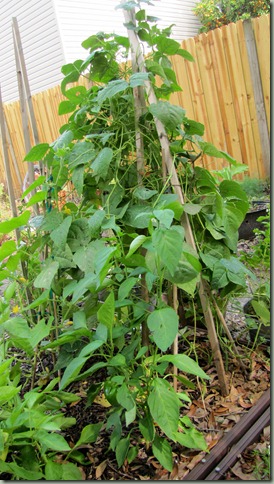 They are so prolific,in all the beds,Now,don’t get me wrong,I like fresh green beans.Next to broccoli,they are my favorite vegetable,but it has gotten to the point that I cannot give them away!And we just cannot eat them every night.People are starting to fear me.Neighbors won’t answer their doors….

But,how do you judge what is going to do well in the garden,from one year to the next? 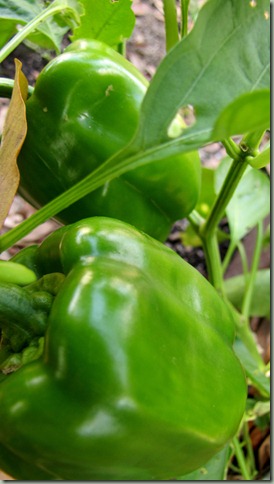 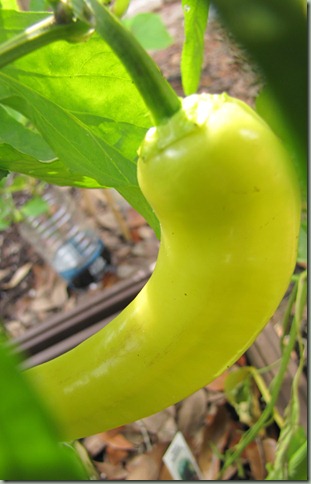 Mesclun,from Burpee,that I got as a bonus when I ordered seeds.

Though all three produced,my award goes to the Mesclun and the Black Seeded Simpson .The Dark Green Cos seemed to turn bitter if it wasn’t harvested right away,and it was a heavy producer,which made it difficult to keep up with.The Mesclun produces the tastiest baby greens,and the heat doesn’t seem to bother it.

On a side note,when Kyle and Gina were here,on Mother’s Day,I let them pull carrots and pick green beans.After hosing them off,they ate them straight out of the garden,and looked at me in shock.All they said was,”These are so sweet.It’s like eating candy.Can we pick some more?”

Alas,the tomatoes weren’t ready quite yet,or they could have done something my mother taught us,when we were kids.Take a salt shaker out to the garden,sit down,and have a feast!But,don’t tell Dad!

For cucumbers,I planted Poinsett 76,and they are just starting to produce… 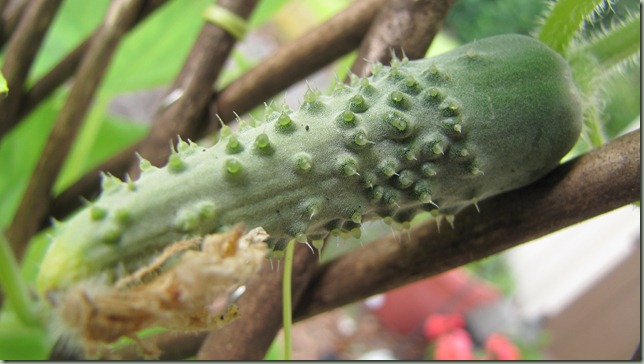 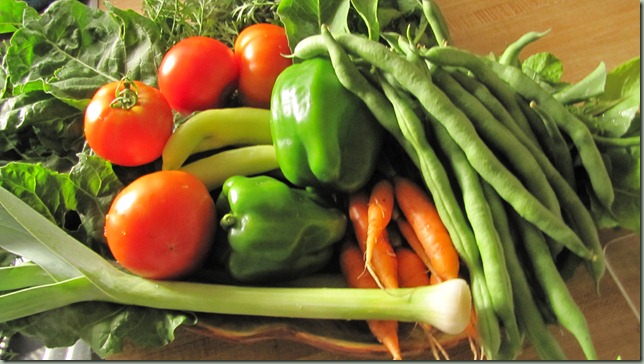 and when I sit down to eat,poolside,I find my dining companion….. 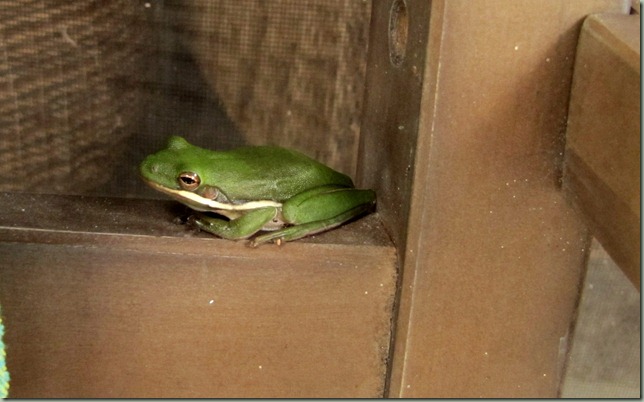 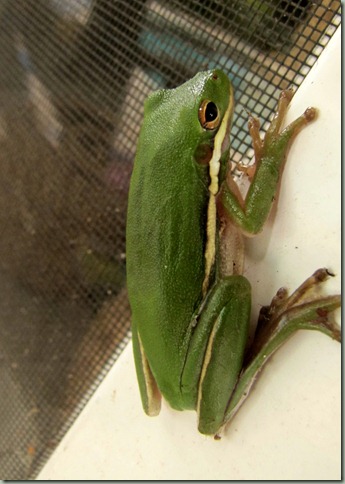 So how is your veggie garden growing,

Wow, what a great haul of veggies. I really want to get serious with veggie gardening and think I got too late of a start this year.

My goodness! Five raised beds? That is a lot of veggie gardening. Your harvest looks so healthy and fresh. I just have two Husky Cherry Reds and one Yellow Pear still producing at this time. I love Galinas but lost all my seedlings from the fall. I need to order more for fall. The Cherokee Purples take too long to set fruit for me for the spring, but in the fall....wonderful! I love tomato sandwiches.

Wow, you have lots of veggies to harvest! I just started my very limited veggie planting this year, still waiting for the fruits :)

Hi Chris...Dinner looks and sounds like it's going to be yummy. It's always nice when more things go right than wrong in the veggie garden and it looks like you had a very successful spring garden with all that first-class treatment you gave your veggies.

I just finished pulling up the last of the carrots and my leeks were ready in the first year...perhaps the Florida weather speeds them up...don't know but they made some delicious potato soup.

My tomatoes are going strong but our lettuce has been done for awhile now.

Chris,
Congrats on all those beautiful and tasty veggies. It was a strange year for me. I had so many edibles left over from the fall garden that my harvests came in way early. Once it warmed up (early Feb.) what I had planted in Oct/Nov really took off. But it didn't give me a chance to plant very many new things for spring. Anyway,not much going on out there now... tomatoes and peppers and onions mostly. I'm trying some (black) cherry toms in an Earthbox ... hoping they'll produce through summer. We shall see.

Oh, I can't wait until I can eat something out of my garden. You veggies grew so fast! I am so impressed. (I like your little green companion!). :)

I am new to Florida, what months do you plant veggies here? I seed veggies in the home improvement stores but it seems like they wouldn't be able to finish before the heat of summer hits. Any info or tips would be appreciated.

I start my fall garden seeds(cool weather veggies) in July and try to have the plants in the ground right after Labor Day.For the Spring garden,I try to start in January with the seeds.It is waaayyy too hot for anything now.Cherry or patio tomatoes in a large container would work.You could try eggplant from plants bought at HD or Lowe's.Black-eyed peas will do well,too.But it still could be too late.It is a learning curve with the veggie garden.Trial and error.But,still worth the effort.Just figure you're gonna make some mistakes and just have fun with it.God luck!