Glory Be! Another Mini-Me Wall !! 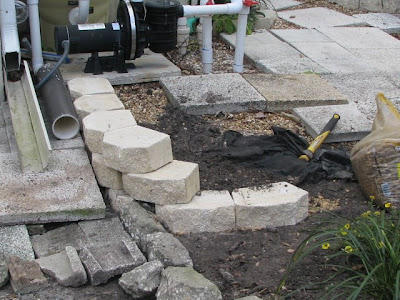 As you can see,we have drainage issues by the pump for the WaterPark.Not only does water come shooting out of the pump whenever the pool(AKA The WaterPark) is back-washed, but we have a gutter drain spout that has a drop off of two and half stories!So,whenever it rains,well...you can get the picture.....And,rest assured, it ain't pretty.
No matter how much dirt and/or rock we put in there,it would all wash away.
So,it has been decided that another mini-me wall should go in there.Along with a French-drain.

It took one entire day to get 10 blocks laid.Tree roots,etc.Grrrr...
.
What you are looking at is our temporary fix,until the whole project is finished.(We could get rain. It is possible...Seriously,it could happen.....).
Eventually,it is anticipated(and hoped--puhlease,puhlease,puhlease)it will look like a mirror image(if only a mini-me version) of the original GreatWall.

Tomorrow,the GreatWall is taking the day off.We are going to Honeymoon Island,in search of eagle nests.Rumor has it,that for the first time in forty years,eagles have nested there!With a live chick! The nest has been put off limits,but hopefully,we can get close enough to get a good picture,or two.
If not,we've heard tell that there are shells there!

Good luck seeing the eagle or happy shelling whichever it may be.

Well...that temporary fix was sure a lot of work and will make the historic eagle event a very nice distraction. I hope you don't get the flooding rains.

I've got pictures of the mommy and eaglet there. I have better luck seeing them in the early morning hours than the later afternoon. Check out the ponds there too. There have been record numbers of migrant ducks as well.

Ack! I'm such a dope, I was talking about the nest at Fort Desoto. Sorry. :)

Dani-
where is the nest at Ft.DeSoto?

In Terra Verde, close to the end heading towards Ft. Desoto, you'll see a large freshwater pond on the right side of the road(you'll see the signs stating the nest). If you look across the pond in the pines you'll see her nest. I've gotten a ton of pics of them, but only in the morning hours.