The Need To Compromise

Ok,so we gave up on the idea we'll be able to have a vegetable garden this spring.We still haven't heard from Hillsborough County regarding the drainage project,and/or when the deed is to be done.
So,instead of going to all of the work of putting in raised beds,we went with containers.But that's easier said than done.All of our biggest containers were already being used,and we didn't want to buy new ones just for this,so we had to compromise.And,as for myself,I hate compromising. Grrrr.....
But,compromise we have done.
So,this will probably be our vegetable garden for this spring.I am loving the wash tub,though.It's all full of different types of peppers.Green,orange,hot,you name it. 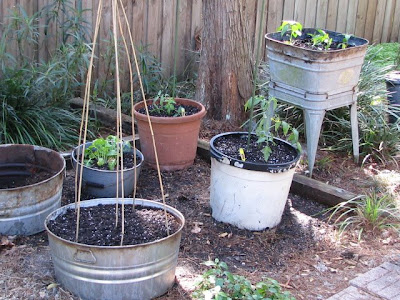 The tub in the lower left is pole beans,the two on the right are tomatoes,and the little one(in the back center) is arugula.All the pots have lettuce seed thrown into them.We're just making do here.We,also,planted rows of carrots and Swiss Chard,as border plants,in the other gardens.
You have no idea how we are soooo looking forward to having our regular garden back..... And that one will have raised beds,for sure.

Onward to the jungle-project.It is almost totally cleaned out,now.Thank you,thank you,thank you to whomever invented Round-Up.We finally had to give in and bite the bullet and give up on pulling and digging everything out,throw in the towel,and buy Round-Up.Now,it just needs to do its thing. In case anyone wasn't already aware of this,stink weed is a real pain to erradicate! 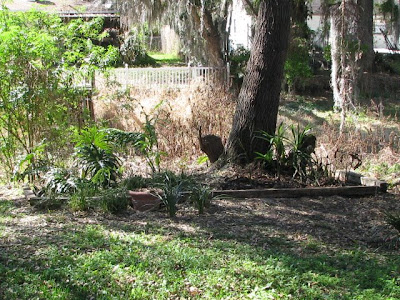 The votes have been counted and we're going to go with azaleas under the oak.And a bird bath will be going in there too.We will use the,temporarily,relocated liriopes as a border,with some Impatiens and Caladiums. Maybe some coleus,too.Still debating the coleus......

After a call to my dad(the go-to guy re:plumerias),the plumerias have been fertilized and cut back.At the rate we're going with the plumeria,we will eventually look like Hawaii.

We decided to put the old stump,from the big-ass schefflera,to use.It is now a cactus garden! 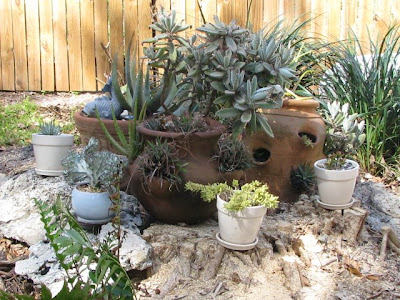 We need to add some more rocks around it,though.We feel a road trip coming on!

Tonite,we shall reward ourselves with T-Bones,on the grill.
Posted by Unknown at Monday, February 23, 2009

Enjoy your vegetables this summer. It's amazing what will grow in containers. I like the washtub :)

Wow...you guys have been busy. It's looking good.

Glad to see you found a compromise for your veggies. I think you'll be happy you found some containers to use so at least you can have a few while waiting for your raised beds...next year? Read back through some of your other posts... you've got some big projects to work on. Then again ... what gardener doesn't right? The weather has been perfect this week for being in the garden... I'm loving it.
Meems @ Hoe and Shovel

You guys have been hard at work! I got up on a ladder and trimmed the dead fronds off the palms this evening. Tomorrow is trash/yard waste pickup.... I used to LOVE finding "volunteers" in the garden! (insert clappy hands smiley here)

I'm Luiz, from TODAY'S FLOWERS blog.
Thanks for visiting my GOODREADINGS.
I saw you love flowers, then I invit you to participate in TODAY'S FLOWERS!
I will be honorable with your support.

I have had great luck with heirloom tomatoes in grow boxes that I got from http://www.agardenpatch.com/home.php?cat=354. regards - marge

Wow-that IS a huge stump. Was that tree lost in the frost too? It must have been so frustrating losing so much, but it looks like you are on your way to a great new start;-)