Ms Fannie
(she was too liberated to be a Miss) 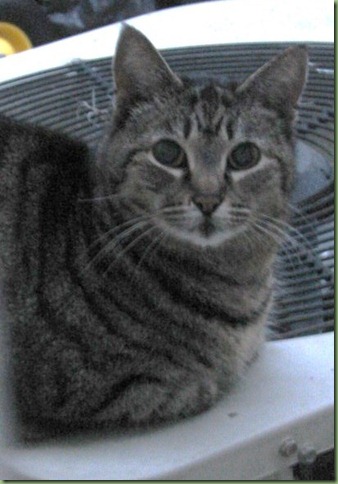 It was thirteen years ago,that Miss Fannie showed up in our yard,as a pregnant kitten.After being examined by our vet,it was determined she was barely six months old,and was a feral cat who had gotten pregnant with her first heat.We took her home,and she promptly proceeded to deliver 4 kittens in our side garden.Two of which survived(including the infamous VooDoo,who could have his own blog!But that’s for another day.)
She absolutely refused to be taken  into the house,and only begrudgingly came in when we took her two surviving kittens inside.She seemed to say,”OK,I’ll come into your laundry room,but NO further!And the kittens stay with me!” (VooDoo was having no part of that,however-he was the biggest kitten I have ever seen and the most adventurous-drove her crazy!)
After the kittens were weaned,we had her spayed and YardBoy considered her his cat.And he fell hopelessly in love.As did she with him.No one else could pick her up,let alone hold her.She would have no part of that.She was his girl.
Every morning,when walking out the back door, we would find a “gift’ from her.Usually a vole,which she had found during the night.
And she protected TheGreatWall as no one else could. 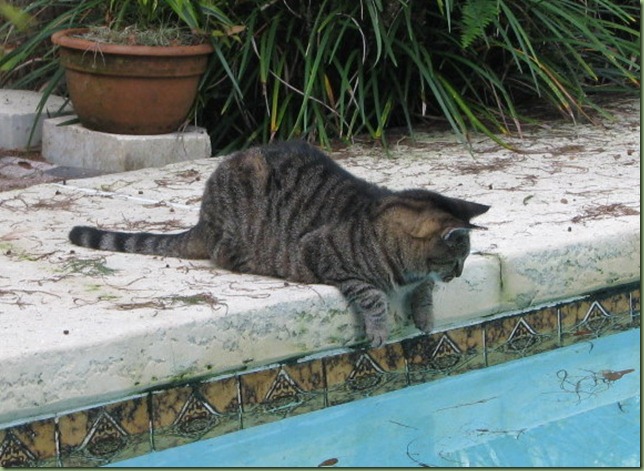 She seemed to take great enjoyment in annoying me while I was gardening.Walking through the garden while I was planting seeds or bulbs,digging things up,pooping where she knew she wasn’t supposed to,etc.
Two weeks ago,she became increasingly out-of-sorts.Refusing to eat or drink,and labored breathing.
Even YardBoy couldn’t approach her.
It was determined she had Acute Renal Failure.(which seems to be common in feral cats.)
YardBoy brought her home,laid her under her favorite Giant Liriope,and she passed away within the hour.
We buried her under the stand of Norfolk Island Pines,with all of the other  family pets.(over the 30+ years we have buried quite alot of pets back there).
Now,the plan is to find a concrete piece,of a sleeping cat,to add to the garden. 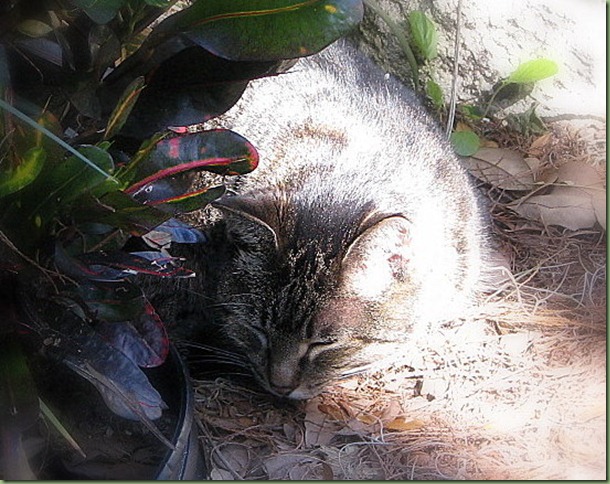 Awww, Chris. Hugs to you guys. Your post brought tears to my eyes because it reminded me of my Shilo who has been gone for three years now and I still miss her terribly. I love your pictures. Another friend of mine lost their kitty this week too. I'm thinking Shilo is getting lots of new friends on the other side of the Rainbow Bridge.

Oh, I am so very sorry. Those fur babies sure do make a home in our hearts. Beautiful tribute, and I love the idea of the stone with the sleeping cat. Hugs to you. Deb

It is always hard to lose a family pet. Sorry to hear that. This is a very beautiful post dedicate your Ms. Fannie. The sweet memory of her will always be in garden with you.

So sorry you have lost your beautiful girl. She had kind eyes for a (formerly) feral cat.It's good that she travelled on in familiar territory. Our garden has a lot of pets in it too.

Very sorry to hear you are missing your liberated Ms. Fannie. She was pretty smart to have adopted your family when she did. I love the idea of the sleeping cat statue tribute for your garden.

I'm very sorry to hear of your loss. I too have an old oak where my numerous pets have been buried over the years. This is a wonderful, beautiful tribute to your sweet companion.

I feel your loss. We lost our beloved cat,Rocket, a year ago and we still miss him.

I, too, feel your loss since we lost our "Mocha" about a month ago. Tears rolled down my cheeks as I read your post. So sorry for your loss. She was very lucky to have been loved so much. Huggs to your family.

Chris, While I am at the Flower & Garden Festival next weekend, I will keep a lookout for cat things and send you pics to see if you like 'em.

Jon, I am so sorry she will no longer be there to share the garden with you.